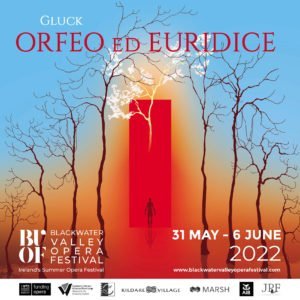 Book opera tickets for 2022 at Blackwater Valley Opera Festival. Ireland’s Summer Opera Festival returns with Gluck’s Orfeo ed Euridice – conducted by Peter Whelan and directed by David Bolger, from 31 May – 6 June in Lismore, Co. Waterford. We are excited to announce that this year’s opera production will feature artistic collaborations with the acclaimed Irish Baroque Orchestra and award-winning CoisCéim Dance Theatre.

Four evening performances of this year’s opera – our headline festival event, will take place at Lismore Castle, with a special Dress Rehearsal for Schools performance on Tuesday 31st May at 8pm.

Orfeo ed Euridice began Gluck’s revolution in music as his score moved the focus from virtuosic performance to music that reflected the depth of emotion and drama seen on stage. De’Calzabigi’s libretto uses the Greek myth as Orfeo embarks on a journey to rescue his deceased wife, Euridice, from the underworld, however all is not so simple. The Gods, via Amor, make this no easy task. Orfeo must not gaze upon Euridice or explain to her the reason why while on their journey out of the underworld, for if he does, she will be lost to him forever.

The role of Amor will be performed by Kelli-Ann Masterson.